“When humans are displaced and deskilled, nonhumans have to be upgraded and reskilled.”


-Latour: “Where are the Missing Masses?”

The rapid rise of systems of automation (not only in the world of grocery shopping, but in other areas as well) has also produced effects on public spaces and discourses.   The prevailing conversations have been related to the elimination of jobs and the increasing isolation and hyper-individualization present in previously social tasks.  It is also fascinating how the automated checkout can open up an avenue for discussion about ethics as well – not only in these areas, but in how the technology has made theft much easier and thus more prevalent.

A statement from the Socialist Labor Party (not an unbiased source, but what really is?) sums up one side of the argument against the economic efficiency represented by automated self-checkout technology: “Increasing profits and holding wages down is what counts, for capitalists. For millions of workers, however, new technology in the workplace leads only to harder work—except for the millions more tossed onto the streets and into joblessness. That, however, is not what concerns the enterprising capitalist.”  Similar concerns arise whenever a machine is created that can do the job of a human.  The other side of this debate is that while certain cashier jobs will be eliminated, they will be replaced with “better” jobs, such as building and maintaining the hardware and software for the machines.  The numbers do indicate a decrease in grocery store employment from 2000-2004 and in 2008-2010, but it is impossible to show a direct correlation between these numbers and the rise of self-checkout.

As low skill workers in other industries, such as food service, fight for increased wages and union representation, concerns over automation replacing them are frequently listed as top concerns.  Even people who do not support  that cause may not do so because they feel that the person holding that job is one step away from a machine in the first place.  Blurring the lines between workers and machines has a dehumanizing effect. 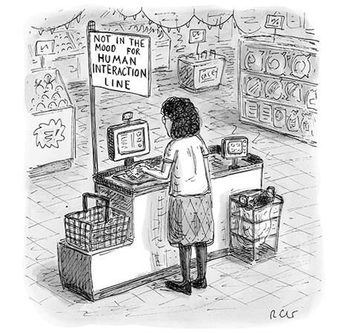 “My local Tesco's has them and I hate them, they take the social point of speaking to the till operator, and feel like you have to rush.”

“I always opt for the self-checkout if I'm not doing a large shop! It really annoys my wife who would rather wait for longer and be served by a person but I quite like it. Not having to answer questions like: 'what's the weather like?' (look for yourself the window is just there!)or 'are you having a nice day?' (I'm in the supermarket on a Saturday - NO!) I know that the machine telling you off is patronizing but I'd rather a machine patronize me than a real person.”

These comments come from a BBC article published shortly after the introduction of automated self-checkout.  What is it about these machines that causes such opposite reactions in users?  In order to get to the heart of this tension, one must remember what the grocery experience was prior to the implementation of the self-checkout.  Technology for the past century has in some ways provided a more social experience, but in many more ways (at least I would argue), the trend has been the isolation of the individual from other individuals.  Because of the prominence of automating and isolating technology, the message clearly being sent and received is that a hyper-individualized experience, free from the inefficiencies of human interaction, is superior.  The implications of this are far-reaching beyond the relatively trivial world of grocery shopping (though to read these comments, you wouldn’t think the checkout experience is that trivial after all).

This feeling hyper-individualization created by automated systems leads to ethical dilemmas and forces humans to ask themselves what their responsibilities are to their fellow human beings.  I would argue that this dilemma arises any time efficiency and profit are valued as the highest ideals.

One manifestation of this ethical issue is the staggering amount of theft that takes place a self-checkout machines.  This may not be as surprising, as most people have seen someone exploit a vending machine to get free products.  When the object providing your service is nonhuman, it is easy to justify unethical behavior towards it.  Some studies show that up to 25% of shoppers regularly steal when using the self-checkout, and with each exploit discovered, something is added to the machine to respond.  Although the greatest theft deterrent is likely the human employee supervising the area.

I have already touched on automation’s impact on labor, and this too opens up an ethical dilemma for shoppers.  As a frequent user of these machines, I am forced to confront my own desire for speed and weigh I against another’s job.  I usually go with self-interest.